Several years ago, to celebrate July 4th, I flew to Philadelphia with an ex who complained every night because I wouldn’t sleep in the same bed with him. Weeks later, at a Cleveland Indians game, I discovered he’d been sexting a coworker in another city while we were there.

This morning, as I walked to a bus stop, heading to work, I passed a couple yelling and swearing at each other as the woman strode at least 10 paces ahead of her boyfriend, baby daddy, or husband.

“I’ll just stay home then!” was the last thing I heard him say.

I remember those days. Decades of them. So, if you were to ask if I’m truly happily single, I would smile with an upturned chin and say, “Ab-so-lutely.”

Happy Independence Day from me and Cleopatra, who may not look happy but strutted around in her wings, thinking she’s a Victoria’s Secret model now. 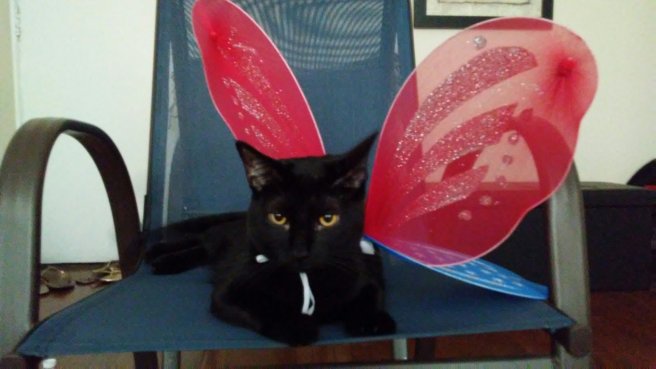